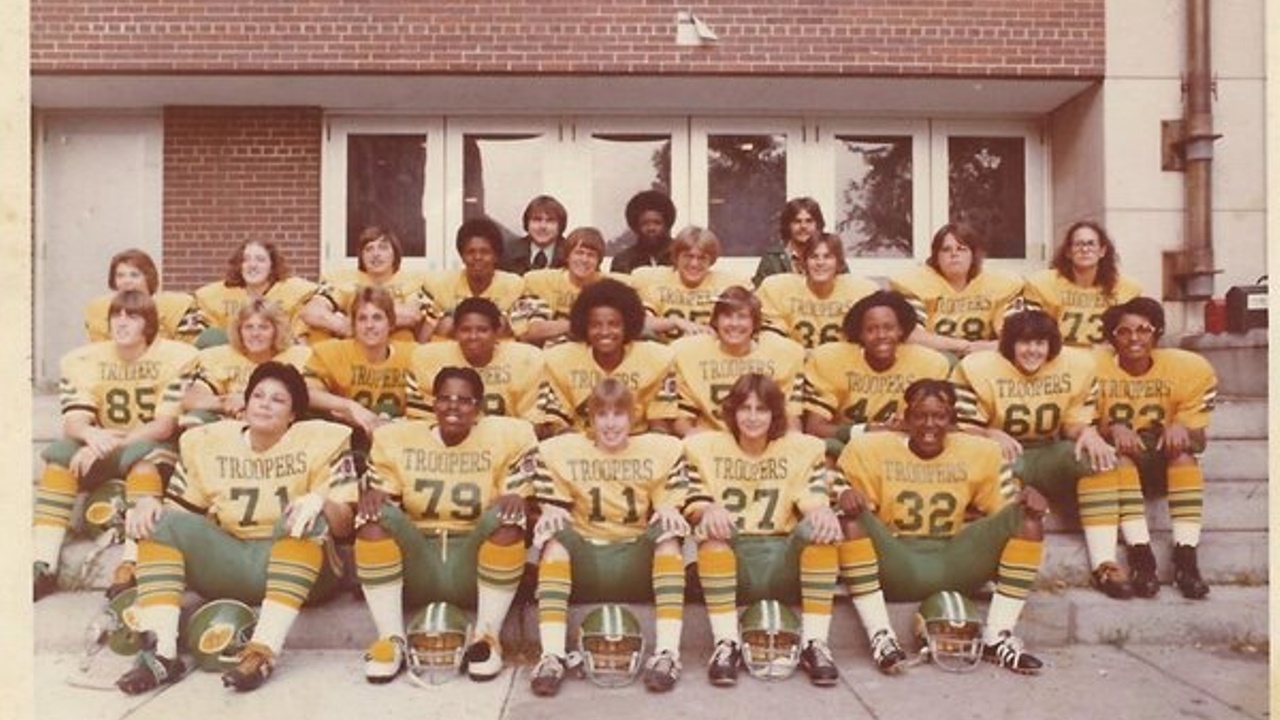 The surest sign of fall in the United States is the start of football season.

The season began this week, but as a shadow of its usual self. To kick off the season in this unusual year, I’m sharing a unique part of football history that has largely gone unnoticed.

My friend Gregor Gillum of Versatile Words posted articles featured in a sports exhibit at the Ohio History Center. With his permission, I offer this post by writer Bailey Martin:

On August 6, 1971, a group of women known as the Toledo Troopers began playing in the Women’s Professional Football League. Before the end of the decade, the Troopers would amass seven consecutive perfect seasons and become what many consider the winningest team in professional football history.

In total, 82 women played for the Toledo Troopers from 1971 to 1979 under their coach, Bill Stout. They practiced five days a week for five months out of the year, but they were only paid $25 a week.

Off the field, they were businesswomen, students and mothers. Years before Title IX legislation would be fully implemented, the Toledo Troopers advanced the cause for equal opportunity in sports through their unprecedented success.

Within Toledo, the Troopers were met with skepticism due to their gender. That attitude changed once they began to play. In a 1972 article in the Toledo Blade, two journalists recounted their experience scrimmaging with the Troopers: “George Plimpton has it all wrong — if you want to find out about professional football, you don’t play with men, you play with women.”

A Commitment to the Game

Coach Bill Stout wanted the Troopers to be viewed as a legitimate and serious team. From 1971 to 1977, he coached the team to a 47–1 record and seven successive championships. In 1978 and 1979, he served as the Women’s Professional Football League’s commissioner. In that same 1972 article on the Troopers, several teammates expressed their gratitude to Stout, attributing the team’s success to his dedication.

The women of the Troopers were impressive and record-setting athletes. The team was selective — more than 100 women tried out for 24 spots in 1970. Linda Jefferson quickly became the team’s star running back and ran for five consecutive 1,000-yard seasons. She rushed for more than 14 yards a carry for multiple seasons and is now one of only four women inducted into the American Football Association’s Hall of Fame.

Due to financial troubles, the Toledo Troopers disbanded in 1979 with a total record of 61–4, but their impact on the sport lives on. In 1983, the Troopers were recognized as the “winningest team in professional football history” at the Pro Football Hall of Fame in Canton, Ohio. The Troopers were also the first to be inducted into the Women’s Football Foundation Hall of Fame in 2014.

The Troopers broke down barriers in women’s athletics, and because of their success, Toledo went on to have several other professional women’s football teams.

To get one great idea in your email early Sunday morning, join our Sunday Coffee community.

To talk with me, please visit our contact page.