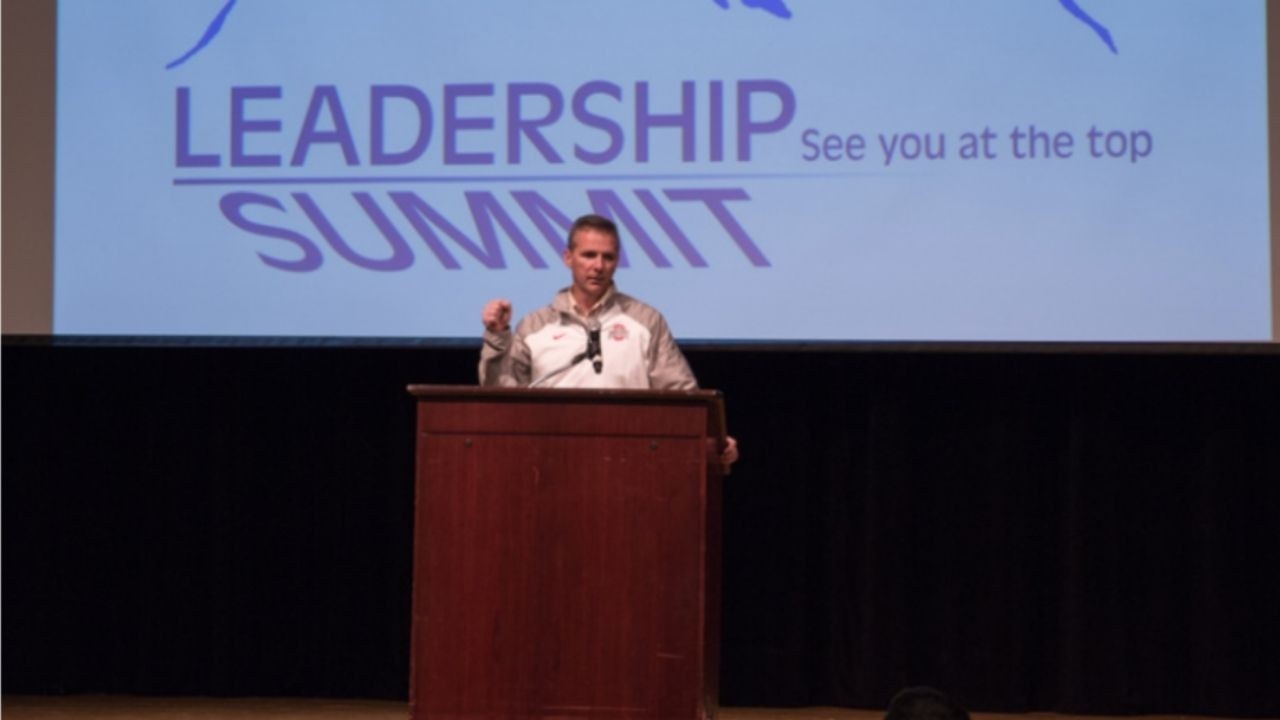 Coach Urban Meyer has written a new book called "Above the Line". It should be a fascinating read as the Buckeyes defend their national championship title in the fall.

Meyer's new book was released on October 27, 2015. I recommend you pick up this book at your local bookstore or by clicking the button you can order Coach Meyer's book now on Amazon at a significant discount.

Back on campus two weeks later, Meyer spoke to hundreds of students and guests at the OSU Leadership Summit. For the first time since the victory, Meyer shared what he views as the critical success factor for his team.

I was a conference speaker in a breakout session where I counseled students on how to manage their online reputations. I was privileged to be one of the few non-students to hear Meyer give these powerful insights.

Despite low rankings early in the year, season-ending injuries for their top two quarterbacks and other obstacles, the Buckeyes managed to beat Alabama in a semi-final game and Oregon in the final game with a third-string quarterback.

How did they manage this feat?

Coach Meyer attributed the wins to creating trust amongst players and coaches to build a winning team culture over the past two seasons.

Meyer said it started with a chance meeting during a fundraiser at his home two years ago. There he met Tim Kight, a consultant and former pastor who worked with business leaders.

As they talked near the hors d’oeuvres table, Meyer realized that Kight’s business leadership skills and approach might be exactly what his team needed. They met the next morning at OSU and began a partnership unprecedented in college sports.

Building an intentional leadership-focused culture would be an unusual approach for a college sports team. Meyer said corporations spend billions of dollars on leadership training, but traditionally college athletics has spent “zero.”

In the end, Meyer attributes much of the team’s success to Kight, who provided leadership training to Meyer, his coaches and players over the past two years.

[In a Wall Street Journal article prior to the National Championship game, Kight explained that it was not about motivational speeches. Instead, Kight was embedded with the team for two years, while he and Meyers implemented a disciplined, systematic approach to leadership training that taught positivity in the face of adversity.

Players wore wrist bands that read “E + R = O” which stands for “event plus response equals outcome.” Kight taught that players have no control over events, such as losing their top two quarterbacks, but only have control over their responses, which determine the outcome.

When faced with extreme adversity, their training allowed the Buckeyes to respond effectively, Kight told the Journal. “Our guys were trained for this,” Kight said. “If you asked the one thing that has powered this team’s resilience, they’d say it’s a brotherhood of trust, and we play for each other. They were taught that. That didn’t happen by accident.”]

“And for the average fan and the person who doesn’t sit through things like this [leadership conference] that is really cool,” Meyer said to the crowd of several hundred students.

“[But] there’s nothing cool about it. It’s a journey of how to teach a group of players and a group of coaches how to become nine units strong. And that’s what occurred in this year,” he said.

In the beginning Meyer and Kight recognized that trust had broken down on the team. He said the team deserved to lose two games in 2013 because he was operating with 6 of 9 effective units. “The common thread missing in all those units was trust. Not that easy to fix. Trust is a very fragile thing, now a days more than ever.”

“How do you get these groups of kids to trust the unit leader [coach] and their head coach?” Meyer asked. “So we went on a journey we called the brotherhood of trust workshop.”

Kight taught Meyer and his coaches how to build strong trust in each unit that would forge a solid team.

Their approach was patterned after the military, specifically Special Forces, with small, cohesive units, and they brought in various speakers, including Navy Seal Marcus Lutrell, who was chronicled in book and movie “Lone Survivor.”

“Small unit cohesion is very important. For me to lead this group,” Meyer said, waving his arms at the hundreds of students, “it’s not going to happen because I don’t know you and you don’t know me. How are you going to develop trust in me?

“However, I can take that small group right there [he pointed to a table of students] and if you give me three weeks, I can find a way to get that group to believe in me. Because if we take care of our business and we get each group to do their business, guess what happens on game day?....It’s magical when it all comes together.”

Building a “Brotherhood of Trust” took the team from a culture of whining and complaining to a culture of accountability and positive leadership, Meyer said.

He said that winning depends on commitment, teamwork and positive results, but none of that can be achieved without trust, especially today. “When I was a kid, if my father or coach said ‘you’re going through that wall’, I’m going through that wall. You are a much different generation than that. You want to know, why should I run through that wall? So instead of complaining about that, we said ‘let’s tell them the why’.”

It was also critical to take a new approach, Meyer said, because his players like most young people today they are ‘independent thinkers, intelligent, don’t just follow the line, from different cultures, different backgrounds, different geographies.” So it was challenging and important to build a bond of common trust.

In his own words, Meyer explained:

“There are three components of trust that you have to have, or it’s not going to happen. [Character, Competence and Connection]. After going through it now for a year and a half, it’s in. This is forever seared on my soul because it’s the absolute truth. It’s not theory anymore. We lived it.

“There’s a big difference between theory and testimony. When I first heard it, that’s really cool. That’s theory. When we lived it and all of a sudden you’re doing this because we lived it. It’s not theory anymore--it’s testimony.

“For someone to trust you, they have to know you’re a person of character. [Not simply good behavior] Character for a young person looking at you as a leader is repeated experience of the person watching you or listening to you doing what you said you were going to do.

“If he tells me I going to play and I don’t play, am I going to trust him? Here are a bunch of coaches, saying ‘I’ve been coaching for 25 years and I’ve never heard that,’ well you’re going to hear it now because we’re not going to lose, we’re not going to go through this again with a lack of trust.”

“Our guys know what they’re doing. At Ohio State you don’t just do your job, you do it very well.”

“Repeated experience from that player to you, knowing that you care about them,” Meyer said. He said that have a program called “Real Life Wednesdays, we spend a lot of time helping them find jobs, talking about their families, eating lunch with them. Because we want them to know this isn’t just about football, which is true, it’s because we care about you.”

“All of a sudden I started seeing some magical things started happening around the program, some really magical things. Those three units that were awful started getting strong, I mean really strong.

“[It wasn’t the coaches’ fault.] The coaches didn’t know about leadership. It was my fault as a leader because I didn’t teach them this because, again, how many leadership-training programs are there around the country for college athletics? None. So there’s no book that I could read. But I figured it out with the help of Tim Kight."

Meyer said that when he had three weak units he could feel it during his ritual of hold up his fist before taking the field in a game. He would feel the energy of only six, not nine cohesive units.

“I hold up my fist on game day and say one, two, three showtime. I don’t feel six hands anymore. Before the championship game, how many hands do you think I felt? Nine. I felt deep in my soul, that team [Oregon] has got a problem. We’re going to play really, really well today and we did.”

In closing, Meyer urged the students to remember the lessons he learned on the importance of leadership and small group cohesion.

“I’m so happy to share this with you,” Meyer said. “I’m looking at a lot of young people in this room and I can tell you have a lot of bright futures. Don’t forget these things as you start your journey.”

I recommend you buy Meyer's book from your local bookstore or use the button below to buy at a significant discount on Amazon. 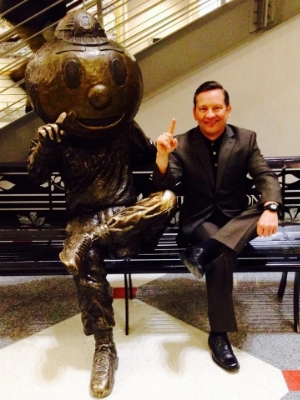 Meeting with Brutus before speaking at OSU Leadership Summit.