Lesson from Manti Te’o: On the Internet, No One Knows You’re a Dog 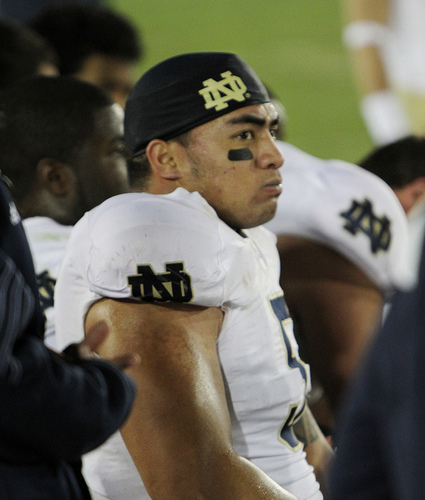 Traveling on business for the past week, I caught only bits and pieces of the Manti Te’o, Lance Armstrong news cycles--on airport and hotel TVs.

Back home now, I’ve caught up and seen more than enough of these crisis communications interviews, attempts to save their reputations.

I wrote about Lance here in October and I stand by my prescription for saving his personal brand. The consensus seems to be that he came off poorly, not seeming to be apologetic enough.  I agree, but I’m not sure he’s capable of warmth and emotion, no matter how much media training he goes through.

More interesting to me is perplexing story of Manti Te’o, the Heisman Trophy candidate from Notre Dame.  Considering the information available, it’s difficult to determine how or whether he was complicit in the fabrication or perpetuation of his imaginary girlfriend.

Katie Couric’s interview yesterday wasn’t helpful in clarifying, when Manti used what is no doubt a coached-line: “I wasn’t as forthcoming, but I didn’t lie.”  What 20-year-old says “forthcoming?” OK, and don’t get me started on the internal logic of this.

I just advocate that clients come clean and not parse confessions like this because they end up dancing, seeming evasive or contradicting themselves, as Manti did later in the interview. “The biggest lie I’m sorry for is the lie that I told my dad.”

Of course, then Dad, who reportedly told tales of Manti meeting his “girlfriend” on visits to Hawaii, defended his son: “He’s not a liar. He’s a kid.”  I’m not going there. Let this speak for itself.

Redefining Relationships in the Digital Age

The one issue that is really interesting in all of this is: regardless of Manti’s role, there is an obvious difference in the way we are all redefining relationships in the digital age.

If we take college student Manti Te’o at his word, he at some point believed that someone he had never met in person was his “girlfriend.”  Still, he says he had a deep emotional attachment to her.

Is this how we now define “girlfriend”? Is this how college students are defining “partners”? In general, probably not.  But what’s the difference between this and having hundreds or thousands of “Friends” on Facebook, whom you’ve never met?

The nature of relationships is being redefined on online.  I have people I communicate with around the world, most of whom I’ve never met. I’ve not talked with them on the phone, nor on Skype.  I only “know” they exist because I’ve seen their LinkedIn profiles, their websites or other elements of their digital footprints.

On the Internet, no one knows you’re a dog

This all made me recall the famous New Yorker cartoon in which one dog is online in front of a computer and says to another dog, “On the Internet, no one knows you’re a dog.” You can see this cartoon, which is now 20 years old (same age as Manti!) here on Wikipedia.

It seems often to be more about quantity than quality.  I don’t know the absolute answer, but my more recent commitment has been to focus on developing deeper, more meaningful relationships with fewer people.

This means taking those relationships off line. In person is best. But “in-person” is redefined if we’re in different parts of the world or otherwise separated. It means seeing each other on Skype, or Google Chat, and talking by phone.

Obviously, we never can really fully know other people, but in the digital age we should attempt to keep our relationships real, however we define it.

Manti Te’o’s situation should give us a moment to rethink relationships in a digital world.

We email, text, and Tweet, but are we really connecting?

What are your thoughts?  Are you connecting more or less?

Leave your response below.