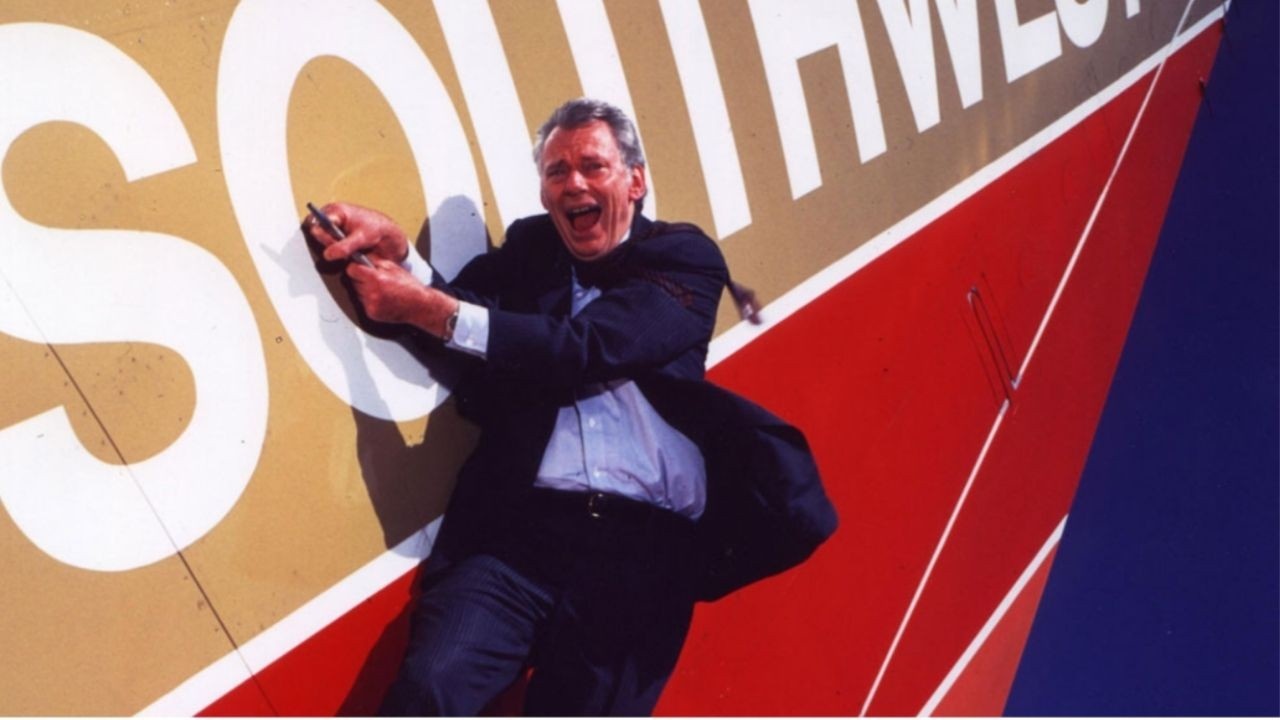 Your employees come first. And if you treat your employees right, guess what? Your customers come back, and that makes your shareholders happy. Start with employees and the rest follows from that.

When Herb Kelleher passed away in Texas last week at age eighty-seven, he left a legacy of a big personality, a creative business model, and an airline industry revolution.

The cofounder and former CEO of Southwest Airlines was a colorful personality whose unique approach resulted in Southwest growing to be the largest domestic airline in the United States, with annual revenue of nearly $25 billion.

Herb Kelleher, the charismatic and colorful cofounder of Southwest Airlines, was hardly a cookie-cutter chief executive. He showed up at company parties dressed as Elvis Presley, invited employees to a weekly cookout, handled baggage during the Thanksgiving rush, and brought doughnuts to a hangar at 4 a.m. to schmooze with his airline’s mechanics.

He once arm-wrestled an executive from another company to settle a legal dispute and never hid his fondness for cigarettes and bourbon. Yet he was considered a visionary business leader whose record of sustained success at Southwest led Fortune magazine to ask on its cover, “Is Herb Kelleher America’s Best CEO?”

This is why Kelleher’s legacy offers many great lessons in leadership such as:

Follow a successful model
There is a mythical story that Kelleher and his business partners devised Southwest on a cocktail napkin. He corrected the record, noting that they modeled Southwest after Pacific Southwest Airlines, a successful short-haul carrier I grew up with on the West Coast.

They wanted the same opportunity for customers in Texas as a short-haul airline with cheap flights connecting Dallas, Houston, and San Antonio.

Keep it simple
Since its inception, Southwest had a single goal: to offer low fares and on-time service to customers. With that in mind, it devised a strategy of boarding passengers in simple groups; cleaning and turning aircraft quickly; having a single aircraft type (the Boeing 737) that could be flown by all crews; flying point-to-point instead of through hubs; and focusing initially on smaller, underserved airports.

Don’t give up
Kelleher was an attorney by trade and never intended to run a business. But when the airline made its initial filings to fly from its home in Texas, Southwest faced an onslaught of lawsuits from competitors who wanted to keep it grounded.

This week I listened to a recording of a radio interview in which Kelleher described how he worked for free for four years fighting for Southwest in court, while maintaining his private law practice. Kelleher said he believed he was fighting not only for Southwest and its potential customers, but for the free enterprise system.

Be a servant leader
When Kelleher was twelve, his father passed away and his brother was killed in World War II. As a result, he and his mother "became very close. We'd sit up until 4 a.m. talking about business, politics, everything.

“She talked a lot about how you should treat people with respect. She said that positions and titles signify absolutely nothing. They’re just adornments,” Kelleher said.

Build a strong culture
Kelleher believed that a leader’s most important role is to build a strong culture by hiring the right people. At Southwest he created a “culture of commitment” devoted to the happiness of employees. He said that happy associates would lead to happy customers, a differentiator in the airline industry.

Create a positive customer experience
“What’s important is that a customer should get off the airplane feeling, ‘I didn’t just get from A to B. I had one of the most pleasant experiences I ever had, and I’ll be back for that reason,’” he said. With this in mind, Kelleher put a premium on personality. “What we are looking for first and foremost is a sense of humor,” he said.

“If you don’t have a good attitude, we don’t want you, no matter how skilled you are,” Kelleher said. “We can change skill levels through training. We can’t change attitude.”

For full disclosure, I’m a huge fan of Southwest Airlines, on which I’ve flown hundreds of thousands of miles. It’s my go-to domestic airline, unless I’m flying on a corporate jet or being booked by a client’s agency.

While the fair prices and on-time service are great, it’s Southwest’s culture that keeps me happy. Employees seem genuinely engaged, which is unique in any company, and they get creative to make it an enjoyable experience.

Where else would you have the captain of the plane sing and play the harmonica? (That was before we took off, of course.) I’ve had hundreds of small, positive gestures on Southwest.

This is the legacy of Southwest Airlines’ cofounder and CEO: business success with satisfied employees, customers, and shareholders.