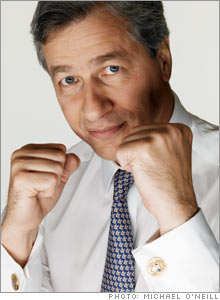 Jamie Dimon has been called the king of Wall Street for avoiding some of the worst excesses of the financial crisis and single handedly fending off tough financial regulations.  His reputation, and that of his bank JP Morgan Chase, is taking a hit on disclosure of massive trading losses.

In responding to the crisis over the weekend, Dimon gets an "A" for effort and strategy, but a "C" for execution, mainly driven by poor message planning and delivery.  To be fair, he may have had great messages, but they weren't delivered.

In terms of strategy, he chose to do a solo interview with David Gregory on the set of Meet the Press, a couple of days before the show.  This got him press on Saturday and a less than hostile environment with a convivial host.

On the main question from Gregory, "how did this happen?" Dimon should have had and delivered a tight, clear message: a very short soundbite.  Instead, he said this:

"First of all, there was one warning signal -- if you look back from today, there were other red flags. That particular red flag -- you know, we made a mistake, we got very defensive and people started justifying everything we did. You know, the benefit in life is to say, 'Maybe you made a mistake, let’s dig deep.' And the mistake had been brewing for a while, so it wasn't just any one thing."

What?  The core goal at this moment is to inspire confidence with key stakeholders, including investors, regulators, the public and Congress.  This is why we spend so much time in media training stressing the process of creating messages and practicing their delivery on camera.

This could have been a powerful statement framing the debate to come. Instead, this weak and confusing answer creates a genuine lack of confidence.

Too bad, Dimon set himself up with the best opportunity to frame the issue but failed to turn it to his advantage. Dimon, his bank and the entire industry may well pay the price.