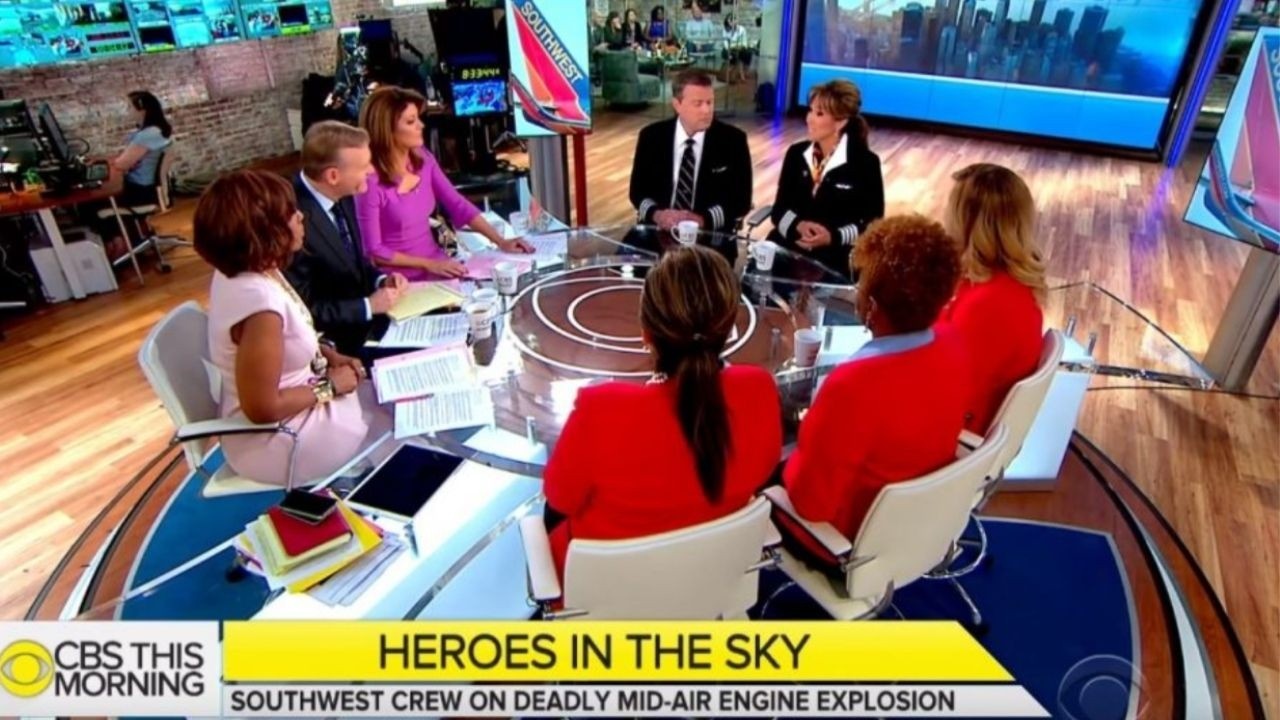 As a leadership coach and speaker, I’m on the road virtually every week and, if I’m traveling in the U.S., I’ll likely be on Southwest Airlines. It’s been my go-to carrier since forming my consulting practice 14 years ago.

That’s why I paid particular attention to a CBS morning interview, which I happened to catch live in an airport, with the whole crew of Southwest Flight 1380.

You might recall SWA #1380 was the plane that had an engine explosion that took the life of a passenger on April 17. My condolences to the family of that passenger, Jennifer Riodan, whose death was the first fatality on a U.S. airline since 2009. As the captain said in her interview, "The survival of 148 never eclipses the loss of one.”

Lessons in leadership
As I listened to the interview with the five crew members, I realized I was hearing powerful lessons of leadership, teamwork, and communication in the workplace. I re-watched the interview that night in my hotel room, taking careful notes, so that I could share them with you.

The flight had taken off from New York's LaGuardia Airport. After reaching cruising altitude the left engine exploded, sending debris through a passenger window. This caused the plane to lose cabin pressure and oxygen masks fell from the ceiling.

Try to imagine how you might react in this terrifying situation as a pilot, a flight attendant, or a passenger. You hear a loud explosion, the plane banks steeply, your ears pop from sudden decompression, wind and debris are blowing through the cabin, and you are looking for some sense of reassurance that you will survive.

Many passengers began texting what they thought might have been their final messages to their loved ones.

Here are some of the leadership lessons I heard from the crew of Flight 1380:

Calm leadership in the cockpit
Though this crew had never worked together before, they reported a sense of calm and confidence throughout the flight, conveyed from the cockpit to the flight attendants to the passengers.

The plane was piloted by Capt. Tammie Jo Shults and first officer Darren Ellisor. Shults was one of the first women Navy fighter pilots, who flew F/A-18 Hornets and trained other military pilots. She said her military training kicked in immediately.

"I have been in cockpits where the dynamics of the flight are not normal and they also make it hard to even see or read the instrumentation. So that certainly helped to kind of keep my calm when this sudden explosion happened, and we are moving in a radical way and we're not in balanced flight," she said.

Her first officer Ellisor was at the controls when the engine exploded. The plane, which was on auto-pilot, suddenly veered to the left, the wing banked 40 degrees, and the plane began to descend. Ellisor took manual control of the plane and he and Shults assessed the situation and began to work through their checklists. They determined Philadelphia was the best emergency landing spot and began their procedures.

"Initially our job is to get on oxygen to take care of ourselves first," Ellisor said, "communicate with ourselves, and once we take care of the plane and get the first initial checklist, then our job is to talk to the flight attendants and find out, okay, what's going on back there, how are you doing."

Communicate with the team
Shults said her first officer made sure the team was informed. "He made keeping in contact with the flight attendants his priority," Shults said.

"He took care of switches, checklists, but he was always available when they called so that he could answer their questions, he could give them information because it's so different when you're in the back and you don't see what's happening, you have no control of what's happening and you don't know what they're doing or thinking about, so he kept them calm," she said.

Build trust before you need it
Captain Shults said the airline’s usual procedure is to have a “huddle” first thing in the morning to discuss the routes and the weather, which they did prior to their first morning trip from Nashville to La Guardia.

But Shults thinks it’s important for leaders to get to know their team on another level. “The protocol at Southwest is to have a morning brief, but I tend to go deeper just because people are deeper than the weather. We spoke about things that were a little more interesting than just the weather.

"In LaGuardia, when we had a little extra time, we were chatting, and Rachel had gotten a new Bible with room to journal on the side, and she and Seanique and then Kathryn was talking about she was in a study of Psalms, which is where I'm doing a study in Psalms and Proverbs," Shults said.

Creating a bond of trust
"When you talk about things deeper than the weather, your family and faith, the things that matter to you, even if they're different, it tends to bring a bond."

The crew’s shared values had given them a bond and a deeper sense of confidence when tragedy struck.

"Well, it was the peace that God had given us all. It's a peace that surpasses all understanding. Like Tammie Jo said, we came together beforehand and we all talked about God, and not knowing what was going to happen minutes later, God had already prepared us without us even knowing," Mallory said.

Trust enables communication
"We didn't have to communicate verbally with each other because we just had trust and we were able to just do what we needed to do. But to communicate with our passengers we had to have a very loud, stern but caring voice," said flight attendant Rachel Fernheimer.

“And I think that was the most important thing was to just – even though our ears had popped from the rapid decompression and there was wind and debris all throughout the cabin, in the midst of chaos you have to just look at someone. And I think eye contact was the biggest communication during that," Fernheimer said.

“We had to take ourselves out of the equation and realize it wasn’t about us at that moment, it was all about our passengers.”

Flight attendant Kathryn Sandoval agreed, “The way we all remained calm, reflected on the passengers because they saw we were calm.”

As a leader or team member you’ll hopefully never face a crisis as terrifying as Flight #1380, but you can apply these important lessons in creating calm and confidence with your leadership, teamwork, and communication.

You can watch the interview here:
Southwest Flight Crew on CBS TV interview

To share your thoughts with John or join John's exclusive weekly newsletter, Sunday Coffee, use our Contact Form.