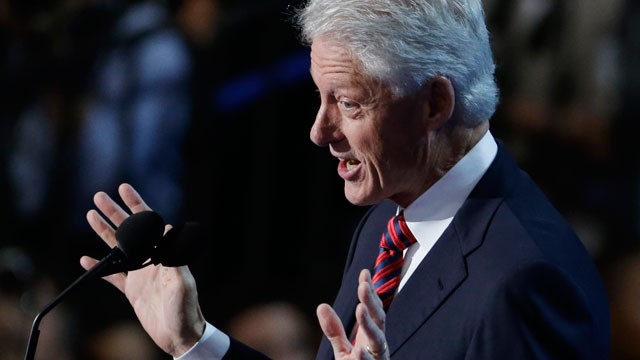 Editor's Note: This is not a partisan blog. Go elsewhere for politics. Political speeches are only used for illustration.

For those of us in the speech coaching business, Bill Clinton's speech last night to the Democratic National Convention was a major event.

To put it in perspective, it's like the Super Bowl for sports fans, like a tornado for storm chasers, like the bottomless pasta bowl for, well, you get the idea.  But I'll come back to this bottomless bowl in a moment.

You see, Bill Clinton is the epitome of the perfect political speaker.  He is the Democrat's Ronald Reagan, a once-in-a-generation communicator who can make his partisan case to the average person.

I'm not going to do a detailed analysis of Clinton's speech. It had it all the right elements: it was simple, clear and engaging. He used logic and emotion. He displayed reasonableness and partisan passion. Most importantly, he told a story. He understands that all effective communication is about the narrative.  (You can watch the whole speech and read the transcript here.)

Clinton, however, made one big mistake that has been his problem since he first appeared on the national stage with a speech to the convention in 1988. He did that nomination speech at 33 minutes, which was twice as long as expected.

Clinton speaks too long. At about 50 minutes, his speech was probably 15-20 minutes too long.  He evidently veered off of the script a fair amount and continued to lengthen the presentation.

There's some argument to be made that he was providing more ammunition to the troops in the hall to go back home and make their case, but his real target was the millions of people at home watching on TV. Here on the East Coast, it was close to 11 p.m. and he was no doubt losing viewers by the minute.

While the partisan crowd clearly enjoyed Clinton, it's possible to have too much of a good thing. At about 30 minutes in you could feel the momentum lag. That would have been the right point for the rousing close that Clinton offered at the end.

Clinton has never left an audience wanting more. But he should. At the end of your presentation, the audience should feel satisfied, not stuffed. The longer you go on, the less clear your message.

Instead, like the bottomless pasta bowl, Clinton leaves his audience full, unable to stuff in another word.

Think about that for your next presentation: less is more if you want people to remember your messages and follow your call to action.

What do you think? Leave your response below.

(Note: You can see each of Clinton's speeches to the conventions since 1988 here.)